You are here: Home / Mac / Get Tricky with the @Rest iPad Stand 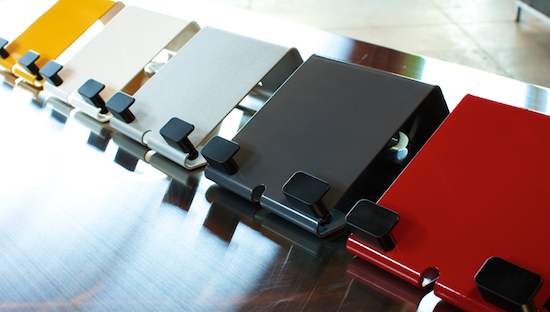 The other day, a friend of mine linked me to site that’s run by a local company (well, local for me, anyways), that makes really cool desks made in the Apple aesthetic. In fact they’re so cool, I may just post about them later this week. While I was perusing the site, I found out that they make iPad stands as well – pretty cool ones, frankly. Which is why we’re all here today.

It’s called the @Rest iPad stand, and it has a few cool features. First, this isn’t any normal stand that pivots and moves to your desires, this is one that’s designed to be mounted, moved, and removed. See that notch in the front of the mount? There’s a matching one in the rear,too. That’s made for mounting your stand, should you want to do that. Maybe you run a coffee shop and you want to use your iPad as a point-of-sale terminal, or maybe you just want to bolt it to the kitchen counter for ease of use while you’re cooking. There’s also a cord notch designed to allow you to charge the iPad while it’s in the dock, and adjustable stands that will hold either the iPad solo, or in a case. IAnd it’s available in five different colors as well.

Now it just comes down to the price. $59 shipped gets you an @Rest case, ready to be mounted or placed wherever you want.