Get A Mac Ads: Is “Mac” Getting Soft?

Like Michael, I also dig Apple’s new Get a Mac ads. I think it’s hilarious the way John Hodgman and Justin Long personify “PC” and “Mac.”

However, I tend to think the ads stereotype the Mac and PC (and the users of each platform) too much. While number-crunching and “serious” work are the forte of the PC and creative stuff is the Mac’s realm, I can say that in very capable hands either platform can perform very well.

That aside, I have a disturbing observation on the latest set of Get a Mac ads. Is Mac getting soft? And is this indicative of Apple’s positioning or business plans in the near future (read: are they going the MS/Windows way)? 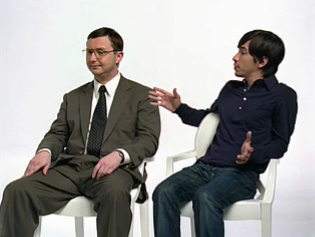 In Counselor, Mac tells PC, “You’re a wizard with numbers. And you dress like a gentleman.”

PC compliments Mac for being creative, but kind of snaps back. “You’re better at the creative stuff … even though it’s a juvenile waste of time.”

Okay, what was that all about?

But then again, it’s all about body language. And PC is quite the jittery, nervous guy here. He’s obviously on the defensive. Still, I asked myself, why are they in counseling in the first place? Is Mac reconciling with PC? What were the writers thinking? 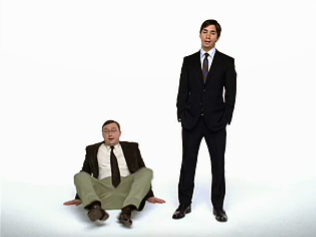 Better Results is standard Get a Mac fare, with Mac trumping PC at what he does best–multimedia apps (he gets to get the girl, while PC gets a burly cross-dresser). Nothing here for me to write about, folks.

The last video, Self Pity, is the one that caught my attention. PC is obviously on the losing end, with Mac–in the big boy clothes–gloating about how he does “work stuff,” too. He tells PC, “I’ve been running Microsoft Office for years!” and “There’s plenty of work out there for both of us.”

Granted, the ads are meant to attract people on the PC side into switching, and stressing that Macs also runs Microsoft Office can make a decision towards that easier (after all, users would have no problem moving their documents to the Mac). But why particularly highlight Microsoft Office instead of the Mac’s other productivity applications–many of which are built-in?

Do recall that continued development of Office for Mac was one of the concessions Microsoft gave Apple during the legal battles relating to the Mac GUI in 1985. And Office may just be the strong hold Microsoft still has over Apple.

Apple just called its own Macs juvenile time-wasters on Counselor, and practically praised Microsoft on Self Pity, not to mention saying the world is big enough for both PC and Mac. Am I missing something here?

Or maybe I’ve had too much coffee.