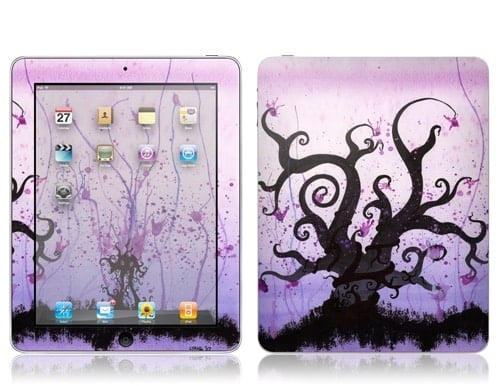 When my wife first got her iPhone, one of the first things she did was buy a GelaSkin for the back. In the two years she’s had it, the sticker hasn’t peeled back or had any problems at all. In fact, it’s been one of the few constants for that device. The iPhone model was pretty cool because it also came with a matching screen background, but of course, it only showed for the lock screen. The iPad doesn’t have that problem, so GelaSkins got creative, and the results are pretty cool.

What they do is provide two stickers to go on your iPad: One for around the front bezel, another for the back surface. Then you download a wallpaper for the device as well, and install them all as one package. The result is a sticker that appears to roll into your wallpaper, then back around to the other side of the device.

This one is titled Growth, and was designed by Lawrence Yang, but there are tons of other choices as well. UK fans might want a Union Jack for their iPad, or maybe you’d rather have an animated version of Los Angeles or Baltimore. Either way there are lots of cool choices, making the decision even harder to make.

This obviously isn’t one-stop protection for the iPad from bumps, but it will stop scratches. Plus they last a long time as well. If you’re looking to make your iPad stand out, this is a great place to spend $30.