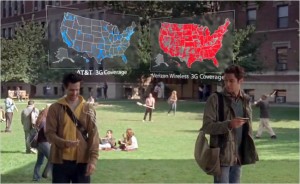 There is lots and lots of talk about this piece in the New York Times yesterday, and it came up as the topic of conversation between myself and my father. A brief word about dad: He’s a Microsoft-certified programmer who owns his own company and has used Windows products since day 1. That said, he carries an iPhone and loves it, and wants to get my mother an iMac. He’s as close to neutral as you can get.

So I’m at my folk’s house, and my father turns to me and says, “You know, I’m ready to huck this iPhone across the room. Not because I hate the device – I LOVE this thing – but AT&T is horrible. We’ve got a cell tower less than a mile away and I get no bars in my own house. How can they get away with this?”

It’s a legitimate question, really. I had AT&T service years ago, and I had nothing but problems in my local calling area. I ended up switching to T-Mobile, and for years I enjoyed quality service and even better, really good customer service. That said, I’d buy a new phone every 6 months because my device would feel old to me after a month of use and I wanted the latest thing.I swore off AT&T, and secretly lusted after a Verizon contract, but the cost of service was so crazy that I stuck with my BlackBerry Curve or HTC Shadow, until something else came along.

When the iPhone was introduced, I got excited – but I waited. I figured I’d wait and hear about all the problems with the v1.0 iPhone, and how bad AT&T sucked. But it didn’t happen. Instead, anyone I knew who had one really liked it. Sure, I heard that reception was spotty in Vegas, or there was no real speed to the internet, but this was pre-3G, so no big deal. With the introduction of the 3G, I figured that the kinks were not only worked out, but AT&T had to have gotten their act together at this point. After all, everyone had an iPhone now, and if they didn’t, they were gonna get one. AT&T was charging good amounts for these accounts too, so they had to be shoveling money into vaults like a drunken Scrooge McDuck, so of COURSE they’d upgrade their network. No big company could screw that up, right?

Fact is, my dad is right. AT&T has no excuse at this point, and people are grasping at straws for either linkbaiting or trying to drive newspaper subscriptions. Randall Stross quotes flawed sources and company shills to show that it’s not poor AT&T’s fault, it’s the iPhone.It’s that device that sucks, and we’re all lemmings, following Uncle Steve over the cliff with his failed device. After all, there was no way the telecommunications giant could screw it up that bad, it has to be Apple.

I love my Apple products. They’re not infallible, and I’ll never tell anyone that my MacBook Pro hasn’t had an issue or two, and I’ve even told friends that I’ve considered downgrading from Snow Leopard until they work out the kinks. But my iPhone works and works well. But once these things started going down, I started to wonder if it was just Apple, and not AT&T. So I did an informal test, and went out with a buddy of mine with an AT&T BlackBerry. Guess what? Same crappy signal, same horrible coverage in the same place. It ain’t my phone, it’s the coverage.

Google’s introducing a phone with no carrier coverage, and it may revolutionize the industry. If the Nexus One takes off and shows that a non-subsidized phone can work, then I see Apple going down the same path. And why not? AT&T is dropping the ball and blaming Apple, Verizon is flipping off Steve Jobs with every Droid ad, and it’s debatable that anyone else can provide the coverage and support that the iPhone needs.

Whatever Steve does decide to do, I’m sure I’ll be right behind him. I’m tired of getting bent over for crappy service with AT&T and paying $200 a month for dropped calls, all while hearing promises of perfect coverage. It’s ridiculous. When the iPhone changes carriers – and I’d almost place money on that – I won’t be the only one in line ready to switch. And when that happens, AT&T is going to lose a lot of money.