Earthworm Jim on the iPhone 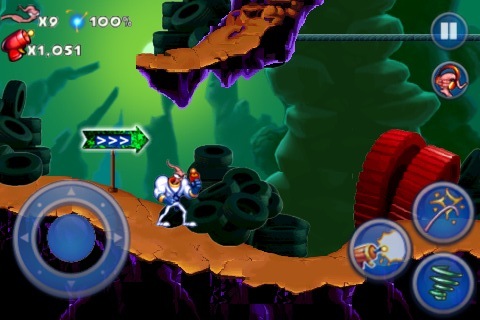 When I was a kid, I used to love Earthworm Jim. It was a fun game which had a sense of humor, was a basic side-scrolling platformer with lots of action, and it looked good for its time, too. So when I was perusing the App store the other day and saw that it was on sale, I figured I’d give it a shot.

The game has all of the same aspects that it used to have. The humor is still there, crows are still circling over your head and of course, there’s Jim, the worm with a spacesuit. The graphics don’t seem to have depreciated over the years, but then again, the iPhone is able to handle a lot more than the average console from 10 years ago. It also has lots of continues and save points, making it easy to pick up and walk away from when duty calls.

The problem for me is in the controls. One of the things I’m looking forward to with the iPad is a changing of the iPhone-style touch controls. That image above is a screen capture from a game I played today. See how big the joystick is? Now put your thumb on that side, and your other thumb on the other, and you end up missing half the baddies as they charge towards you. It’s frustrating, because there are moments when you need that screen real estate, but you need to control the character at the same time. It’s frustrating at best, maddening frequently. With the iPad though, I imagine those controls will become substantially smaller compared to the screen size, and therefore, easier to control. Of course, time will tell on that one, but I can hope it happens.

At .99 cents, it’s worth the buy. I have no idea how long the sale goes for, but once it jumps back up, I’d bail. I don’t think that it’s worth more than a dollar, even with the nostalgia feeling. Sometimes those controls just get too frustrating.