Dish Network Brings DVR Scheduling to the iPad – and... 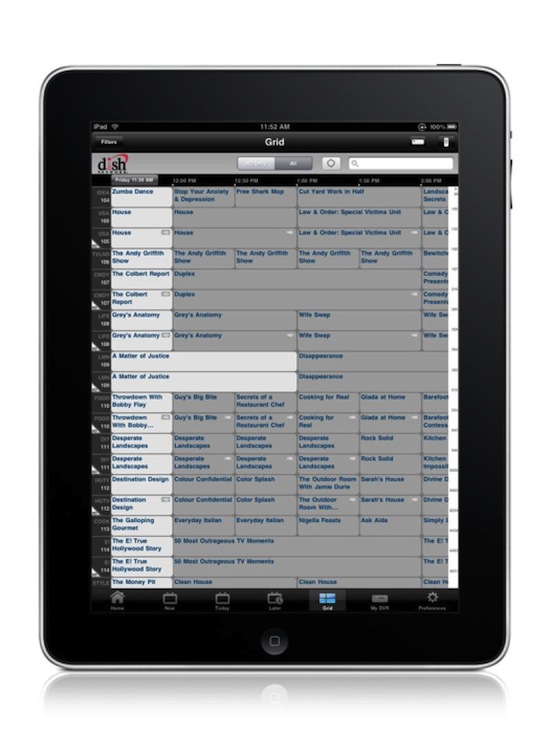 The other day, Dish Network announced that they had an iPad app out, allowing Dish Network customers to schedule their DVR remotely. From the official press release:

Similar to the version available for the iPhone and iPod touch, DISH Remote Access for the iPad is a fully-featured remote DVR scheduler that provides DISH Network customers with complete access to all DVR functions and features. Users can schedule DVR recordings on multiple receivers, delete timers, browse and search nine days of shows, and manage their DVR libraries by setting recording priorities, resolving recording conflicts and deleting programs they have already watched. The DISH Remote Access app is compatible with most DISH Network SD and HD DVR receivers including the ViP 922, the world’s only DVR with built-in Sling technology.

OK, so that’s neat, but it’s not really revolutionary. Then, I read this from the Wall Street Journal:

In the next few months, the satellite-TV provider plans to turn its subscriberâ€™s mobile devices into portable televisions.

The new functionality, currently slated for September launch, will be built into the Dishâ€™s current swath of free applications developed to remotely control the companyâ€™s high-end set-top boxes using Appleâ€™s devices. BlackBerry and Android apps are said to be forthcoming.

Some Dish Network receivers use Slingbox technology, so this would integrate that as well, I’d imagine. This would be the first iPad app of its kind, and would be pretty cool for their customers. Will it happen, and if it does, will it pass the App Store’s muster? Guess we’ll find out.