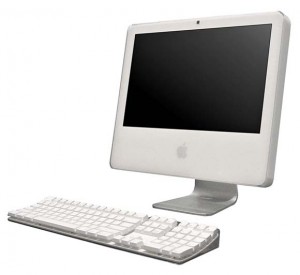 A few years back, an ex-girlfriend of mine asked me for help buying a new computer. She wanted to check e-mail, surf the web, and have a place to put her hundreds of pictures. At the time, I was a PC user, but was heavily considering moving to a Mac for my photography business, and was thinking about switching. So being the good friend that I am – as well as the guy who doesn’t want to deal with support after the fact – I took my ex out to buy a new iMac.

At the time, Apple hadn’t introduced the Intel chipset, Leopard was a year out and the iPhone was a fanboy pipe dream. And since there was only one Apple store in town and it was far, we picked up a brand new 17-inch iMac, a Netgear router and headed towards her apartment to set things up. An hour or so later, the computer was running fine and I told her to call me if she ever had any problems.

She called me yesterday, almost four years later, with her first problem. A few days prior, one of her friends came by the house and couldn’t connect his PC to her wireless network. He stomped around the place, blaming the “stupid Mac” and switched around a few cables until he finally gave up. After he left, she contacted me to fix the problem. “All my friends are telling me the problem is with my Mac, and that you’re an idiot for getting it for me,” she said.

We troubleshooted the problem for a bit and as I suspected, it was all router related, so we had it fixed in a few minutes and a call to the ISP later. But after hearing her friend’s comments, it started me thinking.

It’s 2009, almost 2010. I walk down the street and see people talking on their iPhones all the time. I never hear anyone referring to their Zune or iRiver, everyone has an iPod and they all love them. Mac commercials are now on TV all the time, and the OS is gaining in popularity. Hell, my tattoo artist has a Mac, and he doesn’t exactly fit the demographic. I guess I just didn’t figure that I had to defend the Mac anymore. After all, everyone knows about Apple nowadays, and you no longer feel like a pariah walking into a Best Buy and asking for Mac software.

For me though, the answer came when I asked my ex about the status of her computer. After all, a 4-year old iMac could be on its last legs, struggling to perform on a daily basis. “It’s great. No problems at all. I can play my music in the apartment, all my pictures download easily, and I’ve never had a problem.”

Which ultimately, is the point. People use Macs because they’re easy and headache free Â – and there’s nothing wrong with that.