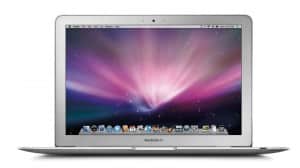 The last MacBook Air refresh was October of last year during Apple’s Back To The Mac Event which led to a thinner design, longer battery life, new CPU and was released alongside a 11-inch model. A new update to the MacBook Air may be coming this Summer.

Production for the new Air is starting this May according to an analyst Ming-Chi Kuo which would peg the release date for sometime this Summer or during WWDC. New features are likely to include a Thunderbolt connector replacing the current Mini Displayport connector.

Kuo tells AppleInsider that his latest round of checks with suppliers and system builders in the region reveals that MacBook Air shipments are set to rebound during the current calendar quarter, fueled by an upgrade to Intel’s latest Sandy Bridge microprocessors, integrated Intel graphics, and the expected adoption of the new Thunderbolt high-speed I/O technology that made its debut on MacBook Pros earlier this year.