Children of the 80’s rejoice: Choice of the Dragon is...

by Jayvee Fernandez 13 years ago5 months ago
1 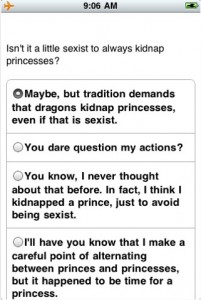 Guys, did you ever play Choice of the Dragon on the web? Well if you did, you probably thought to yourselves that “wow this text-based game is awesome. I wish we could translate the democratic exercise of wit and humor into a mobile device.”

And there you have it. Choice of the Dragon is now on the iPhone. If you are a child of the 80’s you’ve definitely made Choose Your Own Adventure books a part of your weekend routine. I remember that I’d used to cheat my way through the whole book by finding the best ending and reverse engineer my way backwards to the start. Battling space vampires and discovering the lost city of Atlantis were epic. In Choice of the Dragon, you play a Dragon bent to make key multiple choice decisions throughout the game. Your dragon also has a lineup of stats that determine your affinity towards being a “brutal” dragon or a “vigilant” one. It also tracks your phat loot.

Choice of the Dragon is a no frills text based game that everyone should have. It’s free first of all. And second, it’s a lightweight entertainer for those long waits.

Choice of the Dragon is developed by Choice Games, perhaps the only developer of text-based games, perhaps a really underutilized platform for game design but also the one that leaves you most to your imagination.