Bring Your Own OS: My Mac Netbook Computer Compatibility Chart 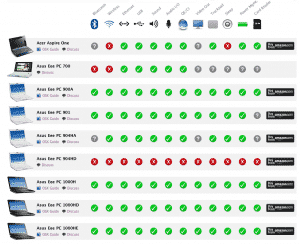 I’ve got a buddy of mine who’s a programmer. He does iPhone apps, iPad apps, and generally messes around a bunch with Cocoa and what-not. A few months back, he was all excited about the new Dell Mini 9 he had coming. I couldn’t understand why, then he says to me, proud as can be, “I’m building a Hackintosh.”

For those of you not in the know, a Hackintosh is a non-Apple manufactured computer that runs OSX. This has surged in popularity since the introduction of the Intel chip, and now most netbooks fit the bill. In fact, that’s exactly what my buddy did, and after some frustrating moments, he had himself a Dell Mac. It was weird.

He’s not the only guy who wants to do this though, which is why My Mac Netbook was started. It’s a neat little site that walks you through the process of installing OSX on your non-apple hardware, step-by-step. Not a bad idea if that’s what you’re looking to do.

But the big kicker here is the computerÂ compatibilityÂ chart. It shows you every netbook out there, and what functions work with OSX installed. For example, if I wanted an Asus EeePC 1000H, I’d be good to go, because it’s all compatible. But if I wanted an HP Mini 210, I’d lose out on bluetooth, a video out, and sleep mode to name a few. They even have convenient Amazon links to the products, just in case you want to buy.

It’s not my thing, but I know a lot of people who would love to hop on board this one. If you’re looking to build yourself a Mac netbook, here’s the first place to start.