Boston Gets an iPhone App 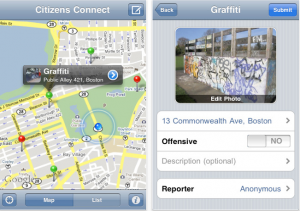 I lived in Framingham, Massachusetts for most of my younger years, which of course, has made me into a huge Boston Red Sox/Celtics/Bruins fan. The Patriots? Not so much. Tom Brady stole my girl.

Anyways, one of the things that Boston is notorious for is crappy traffic. The Big Dig screwed up most of downtown for years, and there are still projects going on today. Even though downtown isn’t geographically huge, it gets pretty crowded down there driving up and down streets designed for horses, and it can be a bit sketchy.

But Boston has lots of problems, so one idea they came up with to fix it is an iPhone App. It’s called Citizens Connect [iTunes Link], and it’s a way for the people of Boston to help out the city with problems as they come up. For example, let’s say you find some graffiti. Take a picture, note the address via GPS positioning, describe it, and turn it in either anonymously or with your info. Then you can see other work tickets out there, and get notified when yours gets fixed via push notifications. This works for lots of things too, such as broken lights, potholes, abandoned cars, or whatever you want. It’s a great way to put the government in touch with the people, and break down those walls.