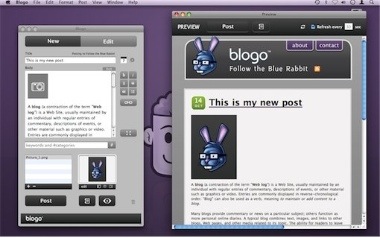 I’ve never used a third-party blog editor for more than a few days. I often find them lacking in features, and not better enough than the WordPress experience for me to mess with.

Having said that, I’ve been using Blogo 1.2 for a few days now, and I’m finding so far that it really speeds up my blogging productivity. The App stakes up minimal space on the desktop, and leaves me plenty of room to have other windows open. It has a nice clean and simple style to it that I like quite a bit, and so far it’s worked well with almost every blog I write on.

I’m going to be using the application for the next month or so, and report back with a full review of it after I’ve had some extended time with it to see if it will truly replace web-based blogging for me. So far – it’s looking good.

Blogo works with a variety of blogging platforms including WordPress, Facebook, Tumblr, MySpace, Twitter, LiveJournal, and many more. It also has a number of advanced features, and actually hands image editing and integration better than any other blog editor I’ve ever used.

It’s available now for $25, and there is also a free trial that you can give a test run if you like.

For full details about the 1.2 update, check the full press release after the break.

Brainjuice announced today that the official release of Blogo 1.2 (https://www.drinkbrainjuice.com/blogo), its Mac desktop blog editor and Twitter client, is available for download. The application makes blogging on the Mac easy even for those with no knowledge of HTML, and this release adds Expression Engine, a popular content management system, and Ping.fm, a service which updates multiple social networks with a single login. This version also adds comment moderation using the new API introduced in WordPress 2.7.

This version adds lots of features to the blog editor, as well as a number of fixes and improvements to stability in general. Highlights include:

HTML Editor:
The editor can now toggle between Rich Text and HTML, combining the ease of use of the classic editor with the flexibility to get into the code and make adjustments when necessary. There is also a preference to turn off inline styles, a welcome addition for those who prefer to keep their blog’s HTML clean.

Ping.fm:
Users can post status updates via Ping.fm, and accounts can be configured to send a status update whenever an article is published.

Comment Moderation:
When used with WordPress 2.7 or higher, Blogo will download unmoderated comments, which can be approved, deleted or marked as SPAM.

Twitter Search:
The Microblog viewer was expanded with a tab to search Twitter’s archives, useful for doing quick research and following trends. The application also displays the most talked-about keywords at the moment from Twitter’s Trends API.

Improved Safari Integration:
The application comes with a bookmarklet which can be added to Safari to post videos, slideshows and inline ads directly from Flickr, Picasa, Vimeo, YouTube, Google Adsense, Google Maps, Boo-box, and Blip.fm without copying and pasting HTML.

Offline Editing:
Users can write and preview their posts while not connected to the internet, as well as save drafts to a local drive to be published later.

Blogo is available for Mac OS X 10.4 and up as a 21-day unlimited trial, and can be purchased at the Brainjuice store (https://www.drinkbrainjuice.com/store/order/new/1) for $25.

About Brainjuice:
Brainjuice is an independent software house founded in 2007 by Benjamin Jackson and Ivan Neto. Its products focus on the Mac and iPhone and put usability first.