by Jayvee Fernandez 13 years ago8 months ago
2 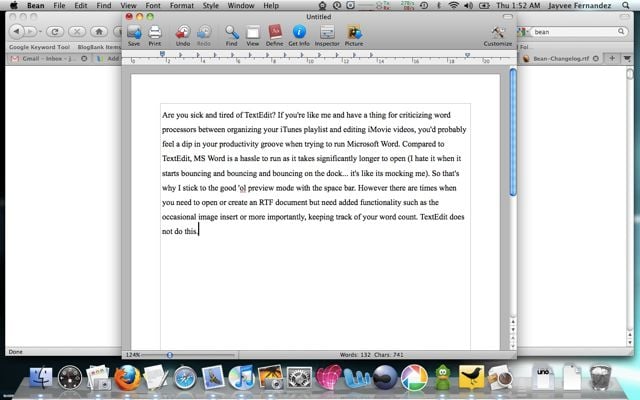 Are you sick and tired of TextEdit? If you’re like me and have a thing for criticizing word processors between organizing your iTunes playlist and editing iMovie videos, you’d probably feel a dip in your productivity groove when trying to run Microsoft Word. Compared to TextEdit, MS Word is a hassle to run as it takes significantly longer to open (I hate it when it starts bouncing and bouncing and bouncing on the dock… it’s like its mocking me). So that’s why I stick to the good ‘ol preview mode with the space bar. However there are times when you need to open or create an RTF document but need added functionality such as the occasional image insert or more importantly, keeping track of your word count. TextEdit does not do this.

For a while, I’ve been using Bean, a free text editing software for OS X. With a recent update (November 30 2009) to the software allowing Snow Leopard compatibility and various other things. It doesn’t do stylesheets as well as MS Word but it is a step above TextEdit in terms of options. There is a small annoyance in default file extensions as Bean saves documents in RTFD (rich text with graphics) whereas the standard for most documents, especially if you’re in publishing, would be in RTF. No worries though, as you can also save in these formats in the pull down menu.

You’re in good hands. Bean was design for YOU, the writer in mind. Here’s why.