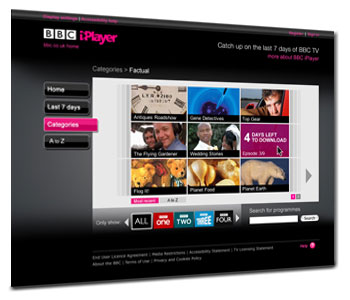 If you’re a UK reader, then you probably remember that whole petition thing so that Macs could get the same benefits of online downloads from the BBC. I mean, after all, who could stand to miss Mr. and Mrs. Bin Laden?

Well, that BBC project – dubbed the iPlayer, has now officially launched for Macs thanks to your demands. It’s not quite equal to its Windows counterpart, but it is a start. Currently you cannot download the shows, but you can stream them. Download support should be added sometime in 2008. The streaming service is in beta, but should be at full release by Dec. 25th.

From everything I’ve heard the iPlayer has kind of flopped on the Windows side of things in the UK. I think primarily because of the DRM issues with it. You can check it out here – but it will only work for UK users, so there’s really no point the rest of us even trying. On the bright side, however, the site does say that BBC Worldwide is working on an International version of the site.