by Jayvee Fernandez 13 years ago9 months ago
2 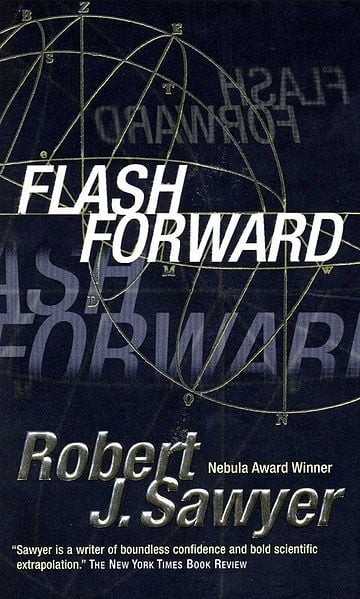 Summary: A scientific experiment begins, and as the button is pressed, the unexpected occurs: everyone in the world goes to sleep for a few moments while everyone’s consciousness is catapulted more than 20 years into the future. At the end of those moments, when the world reawakens, all human life is transformed by foreknowledge.

It is timely to review Flashforward for two reasons. First, this book has been resurrected from its original 1999 print run by Robert J. Sawyer into a television series on ABC this September 2009. Secondly, reviewing the audiobook now is apt since the television series has been put on hold after 10 episodes to continue on March 2010 due to the scheduled Winter Olympics happening early in 2010.

If you bought Flashforward today off the virtual shelves without any preconceived idea when it was written, you’d probably think that the novel was published within the past 3-5 years (but hot damn, you couldn’t find a copy). As a corollary, the television series that generated so much press does entice you to read the novel as we live in a time where mystery theater television series ala J.J. Abrams are now cookie cutter deals since the time of Lost. OK, maybe even from the time of X-Files. I say this because Flashforward, for its time in 1999 was written with concepts that are still considered timeless today — within recent history, the Large Hadron Collider had been operated only once in 2008, which became part of Internet pop culture (‘hey do you wanna see my hadron collider?’).

If you’re expecting Flashforward to align with the television series, you may be disappointed. The ABC series borrows a few characters and plot lines from the book but adds more mystery and intrigue apt to today’s market. The original writing by Robert J. Sawyer is science fiction of the late 90’s and in my opinion one of the first modern works of fiction to openly explore the concept of the space time continuum apart from Roddenberry’s Star Trek. The book does contain a plethora of scientific mumbo jumbo but simultaneously balanced by simplistic writing which to be honest makes for a good pairing. Other critics have suggested that this provides a huge discrepancy to the reading experience but after listening to the audiobook, the delivery by Mark Deakins adds the flavor that is desired in bringing this book to life. Otherwise, it would be a narrative exchange in theoretical physics done in prosaic form.

Mark Deakins reads with gusto, sometimes pushing it too much with his occasional German and French accents (the setting is in Geneva), but in sum the role play works. Deakins successfully pins together the different plot devices — from theoretical physics to a murder mystery — and weaves them into its own one, cohesive world.

Perhaps the fault of the book is the times itself, as we need to remember that this is a science fiction novel written in the late 90’s, over ten years ago. Picking up a copy of Flashforward is definitely a treat once we appreciate this one small detail.