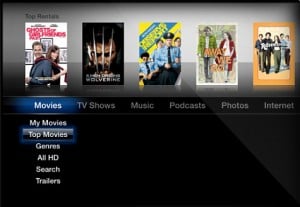 When the AppleTV came out a few years ago, I looked at it and said, “Yeah, that’s neat I guess. But it doesn’t really work for me.” Then they became cheaper and offered more storage, but I still passed. Then they updated to 2.0, and I decided to finally get one.

My experience so far has been a mixed bag. I use Handbrake to rip all of my DVDs to my iMac, then sync the AppleTV with my iTunes library there. I’ve stopped uploading for now until I can pick up a larger hard drive to store all of my music, but for the meantime, this works alright. My biggest gripe was that the system was pretty difficult to navigate through, particularly if I wanted to watch something on my iMac. It was starting to become more of a problem then it was worth.

Well, they put out a new update today, Version 3.0 is out and it’s a huge change. The interface is completely different as you can see from the attached image, with all of my personal items right up top on the menu. That makes it a ton easier for me to move about throughout the system, although once my library gets bigger, it’s going to still be a bit of a pain. I haven’t had much time to play around with it yet, but from what I’ve seen so far, it’s neat.

So if you’re the other person who owns an AppleTV, turn it on and there will be an update waiting for you. Have fun.