Apple To Use Intel Graphics For Smaller MacBooks

by Tanner Godarzi 12 years ago5 months ago 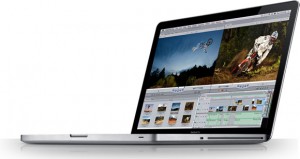 Sandy Bridge, Intel’s newest CPU architecture. will be launching next month and will inevitably power Apple’s MacBook family. While Apple will be using the newest CPUs from Intel for its MacBook family, it will be taking a different approach to graphics by switching to Intel’s Integrated graphics.

Intel’s newest CPU architecture, Sandy Bridge, is set to launch next month during the Consumer Electronic Show and will power a lot of new laptops including Apple’s MacBook line. However, Apple may further differentiate the MacBook line by moving to AMD GPUs for the 15″ and 17″ models and using Intel’s Integrated graphics for the smaller 13″ MacBooks. Moving to Sandy Bridge for graphics, while faster than Intel’s previous generation of integrated video chipsets, would be a massive step back from the Nividia GeForce that powers the current range of MacBooks.

Intel’s 13-inch MacBook Pro and the MacBook Air have been collectively criticized for using older generation CPUs such as the Core 2 Duo when their larger brothers, the 15 and 17-inch MacBook Pros use Core i5 and i7 processors from Intel. Intel disputed Nvidia manufacturing chipsets for its CPUs which created a hardware headache for Apple as it developed the newer generation of MacBook Pros early last year. While the larger MacBooks use a Core series processor coupled with an Nvidia GeForce GPU and Intel integrated graphics as a fallback, it requires a lot of space on the logic board. The 13-inch MacBook Pro on the other hand, only has a limited amount of room for chip sets which limits it to an Intel Core 2 Duo CPU and an Nvidia GeForce 320M which pulls double duty as the system’s Chipset. Nvidia doesn’t make a chipset integrated in to its mobile GPU that supports the Core i3, i5 or i7 processors. The 13″ MacBook Pro’s limited Logic Board space and disputes between Intel and Nvidia has prevented Apple from improving the entry level laptop.

Using Sandy Bridge’s on CPU graphics could lower the price of entry level Macs but it would dilute the MacBook Pro name. A professional level laptop should have at the very least an adequate integrated or discrete GPU capable of handling graphics intensive programs. While Intel has consistently improved its graphics capabilities, they are no match to Nvidia and AMD’s mobile GPUs.