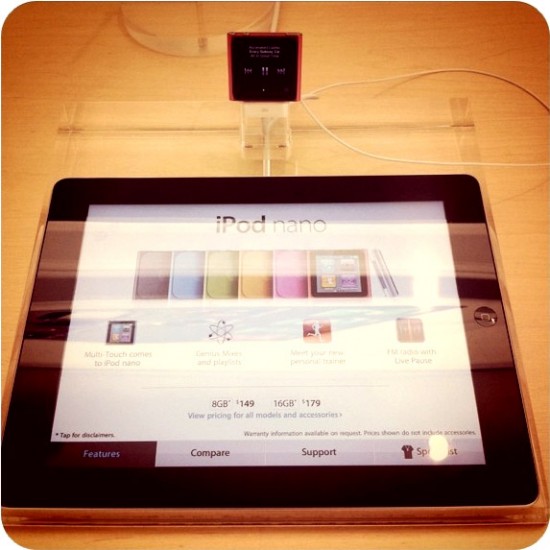 Over the weekend, something kinda big happened, and it wasn’t Judgment Day. Apple launched a new “2.0” version of its retail stores worldwide. Turns out, that hullabaloo about something big happening on Sunday for the Apple Store 10th anniversary wasn’t so much an in-store celebration as an in-store transformation.

After ten years, Apple has overhauled their retail locations by using iPads as product signage, replacing their standard paper price tags and specs. Its a more intuitive way of getting information you need about Apple’s hardware products, and you’ll now find a customized iPad 2 next to every piece of hardware in the store. Each of these “interactive signs” is outfit with a special app that provides tons of information about the product sitting next to it. Aside from the expected product information, there’s also an option for requesting immediate employee assistance. (Don’t bother trying to hit the Home button on these special iPads; the app disables it.)

Customer interactivity is a great goal and all, but Apple has an even better reason for making this change. Reportedly, these “interactive signs” load all of their content from an online server, making it possible for Apple to update prices, product specs, and other information in real time, across every retail location.

Speaking of apps, Apple has also released a new version of its consumer Apple Store app for your iPhone. The app is now designed to make it easier to get an employee’s attention, as well as manage your in-store appointments, and even help customize your new Mac before you buy it. The app works seamlessly with retail stores to simplify the shopping experience.

But we know the truth about why these store changes were implemented. Steve Jobs & Co. are just addicted to making everything futuristic-y.