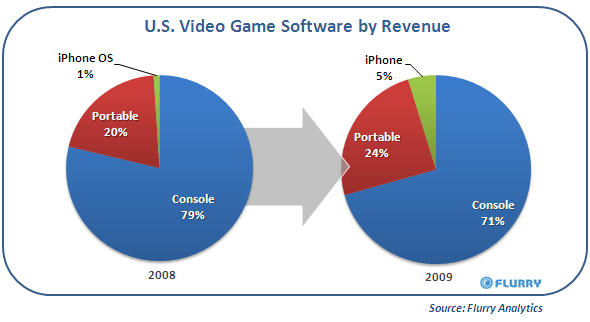 It’s no secret that Apple has been pushing the gaming side of the iPod Touch and iPhone, but now there’s some hard data to back up that information. Flurry Analytics, a company that does mobile analytics (naturally), has decided to figure out how Apple has risen to the top. Here’s how they came up with it:

Using publicly available market data, provided by NPD (mostly through Gamasutra’sÂ Behind the Numbers series), Flurry calculated U.S. console and portable game software sales for 2008 and 2009. We also estimated Nintendo DS and Sony PlayStation Portable game software sales, which make up the significant majority of the portable category, in order to compare these to iPhone game sales. We estimate iPhone game sales using a combination of data made available by Apple and using ratios and calculations from an aggregated set of data that we track through our analytics service.

More interesting to us than iPhone’s impact on U.S. gaming was its impact on the portable category, which we estimate totaled $2.25 billion and $2.55 billion in 2008 and 2009, respectively. Michael Pachter, managing director at Wedbush Morgan Securities and a prominent video game analyst, suggestsÂ “iPod touch is the most dangerous thing that ever happened” to game publishers. As prices come down for the iPod Touch, and games sold through the App Store continue to have lower price points, more of the young gaming generation may switch to Apple devices over Sony PSP and Nintendo DS for gaming.

I have a PSP and a DS, and it’s always frustrated me that the games are so expensive. $40 for a PSP game – the same I can get on a console for $60? No thanks, I’ll pass. But $5 on a game for the iPhone? Sure, I’ll throw that a bone – which is the point. People are more willing to spend small amounts of money on games, particularly during these tough economic times. It’ll be interesting to see where this goes with Nintendo, and what they do next.