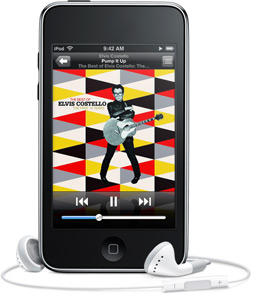 I was at my old job when I first noticed it. The guy across the desk from me came into the office, all excited, carrying an Apple bag.

“An iTouch. You know, the iPhone looking iPod,” he says.

“You mean the iPod Touch?”

That’s when I went and got my shovel and beat him into a small puddle.

OK, so that last part didn’t happen. ButÂ wheneverÂ I hear people talking about the iPod Touch, it’s almost always referred to as an iTouch. Somewhere in their heads, the “pod” gets filtered out of the equation. I spent some time thinking about why this is, and I can only come up with one conclusion: People are stupid.

Alright, so that’s not the only thing I came up with. Lots of people are used to Apple using one-word descriptors for their products. See: iPod, iPhone, iPad, MacBook, etc. Throw a modifier in there, andÂ everybodyÂ goes wonky. But for some reason, this problem never comes up with other Apple products with multiple words in the title. Ever heard someone say they want an iShuffle? An iNano? No, of course you don’t. So why just the iPod Touch? I think it’s because of its similarity to the iPhone, and the fact that there are so many variations of the iPod right now that it can get confusing. That, and people are stupid.

Honestly, I’ve tried working this through, but that’s all I can figure out. Maybe there’s some other great conclusion that someone else has, but for me, that’s it. I’m tapped out. But it makes me physically angry to hear the product referred to that way be seemingly everybody. I swear the next time I hear it, I’m going to get a fungo bat and start swinging.