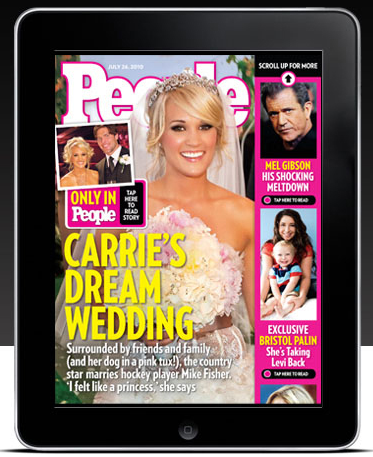 Well, it looks like it finally happened, and I hope that more magazines decide to take this on. Fortune has the report:

Until now, the iPad versions ofÂ People,Â Time,Sports Illustrated andÂ Fortune have cost the same as the newsstand price — $3.99 for each issue of People, $4.99 to $5.99 each for the rest — even if you were already paying to get the paper edition in the mail.

That changed with this week’sÂ People iPad app, which is, for the first time, free toÂ People subscribers. Fortune and the rest of Time Inc.’s (TWX) flagship magazines are expected to adopt the same pricing structure within the next 30 days, according to a source close to the project who spoke off the record.

This would completely change the way I consume magazines. Right now, I have a subscription to Wired, but I find myself wandering over to the iPad instead of the magazine because ofÂ convenience. If it’s on the iPad, I can switch between Wired, DC Comics, and Marvel, all with a few clicks. Better yet, it makes me feel like the Wired App isn’t a waste of money to current subscribers. Of course, the issue here though is that this is only an option for People currently, and Wired hasn’t been announced yet. But if the door is open, this is an opportunity that could happen.