by Lia Espina 13 years ago3 months ago 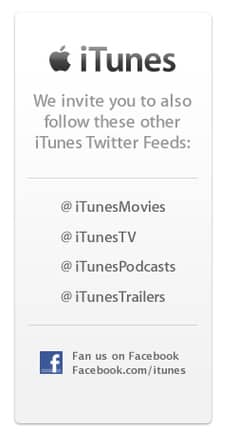 You can follow these accounts now on Twitter to get the latest from iTunes. As of now, @iTunesPodcast seem to be the more active account with 44 tweets.

Creating niche Twitter accounts for the different content of iTunes is a great move by Apple as compared to making a general @iTunes Twitter account. You can just imagine the influx of tweets if that’s the case. Spam, much?

While on the subject of Apple embracing social media, iTunes also has a Facebook Fan Page.