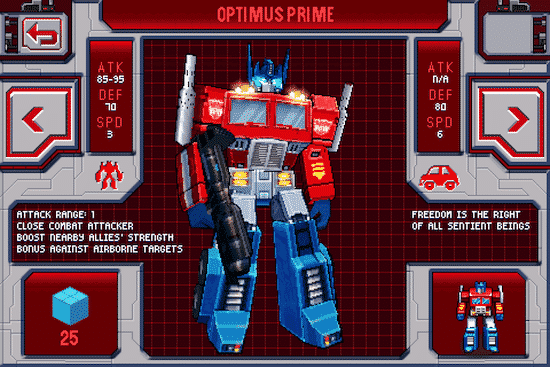 When I was a kid, I was pretty obsessive about my toys. I was big into Legos, G.I.Joe’s, and most of all, the Transformers. I loved watching the cartoons every morning, then playing with the toys shortly after. Those were the days.

Since then, various Transformers games have come around, including a console game for the XBox and a few others, but none of them really captured the spirit and essence of the first and classic generation of Transformers for me. Then I heard about Transformers G1 Awakening [iTunes Link], and I decided to give it a shot. And the results aren’t too bad.

The game isn’t quite what I expected. It’s a turn-based game, with each character moving a set amount of spaces depending on whether or not they are in vehicle or robot mode, and then sometimes they can attack as well. It’s almost like Dungeons & Dragons with Transformers. Honestly, I’m not a fan of turn-based games, because they’re boring. But in this case, I found myself drawn in.

Each character has their own strengths, and as such, it makes more sense to be aggressive with some rather than others. For example, Ratchet sucks for fighting, but you always want him nearby to heal your fighters – Ironhide, for example. This starts to make the game more enjoyable, and next thing you know, a few hours have passed and you’ve gone a few levels in. I find myself playing it quite often, as it’s easy to pick up and go.

It’s not perfect, though. It does take a while to do anything in the game, and the turn-based thing got frustrating for me every so often. That said, for $1.99, it’s hard to beat. My review: 3 out of 5 stars. For me, it’s worth the purchase.