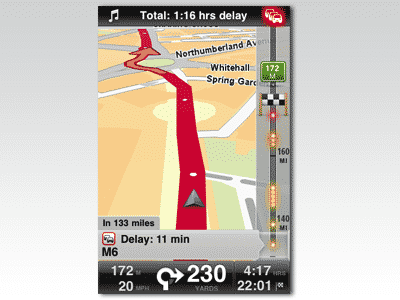 I had a hell of a weekend.

I woke up around 5:30 or so on Saturday morning, and loaded into a Chevy Tahoe an hour or so later, headed from Arizona to California. My friend Chad owns a ’51 Ford Custom, and it was out being lowered at a shop in Los Angeles. It was time to pick the car up, so we decided to take an empty trailer on the 300+ mile journey, with the plan being to crash at a friend’s house that night and leave early the next morning. Problem was, we didn’t know exactly where that new friend lived. Time to try an experiment.

I received a review copy (read: free) of TomTom for iPhone a while back, with the understanding that I would wait until the new version came out to give it a review. Well I haven’t seen an update yet, but this was the perfect opportunity to try out the app, so I figured I’d give it a shot. Somewhere around Palm Springs we plugged in our friend’s address, and off we went.

Now I’ve owned a TomTom standalone GPS device before, and I loved it. If I had any issues, it would be its size and the length of time it took to recalculate a route. Neither are problems on my iPhone 4.

When the app is first loaded up, it almost always has a problem finding a GPS signal. I don’t care if I’m outside standing in the sun, or inside a truck, it all sucks. But not to worry, that’s only temporary. Plug in your destination and the app calculates out your route, using your newly found location. This app is specific. If we need to be in the far right lane out of four available lanes, it showed us. If we need to make a slight bank, it shows us that too. It’s very handy, particularly when you’re trying to navigate the 91 and 215, or whatever other freeways we happened to come across.

With a standalone unit, the GPS would have to be on the window for a clear line to the satellite. Going through a tunnel breaks the signal, although temporarily. In my tests, the iPhone 4 held the signal steady throughout the entire trip, and never budged. as another added bonus, in the bottom right corner of Â the screen is an ETA reading, making it easy to figure out what time you’ll be at your friend’s house.

So would I recommend it? Let’s put it this way: At $39.99, it’s not a cheap app to buy. But we’re going to buy it for my wife’s phone soon, that way she can have all of the same benefits. Not only is it better than a standalone, I can’t imagine going back.