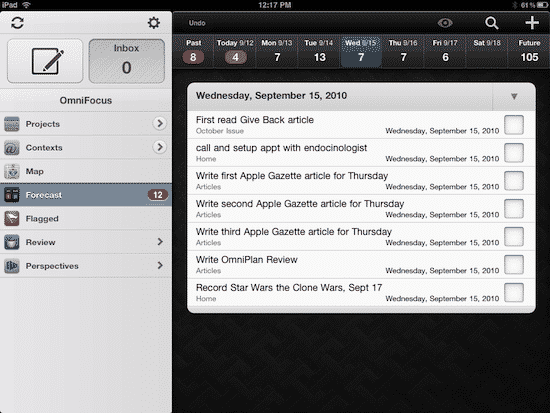 In the past few weeks, I’ve reviewed OmniFocus for the Mac and iPhone, and now we’re reviewing OmniFocus for iPad. This one comes with the same caveats: I was given a free copy of the program to review, and I’ve spent the last little bit checking it out. Here’s the results.

Getting into the OmniFocus system can seem intimidating from a price perspective. The desktop version is $79, and the iPhone version is $19.99. Ideally, you’d want to have both of those apps at the same time, because it makes it portable, yet fully functional for your home or office use. Then there’s the iPad version, the one that I think could really stand on its own, selling for $39.99. At that price you get many of the great features of the other two versions, but one extra: a Forecast.

In both the OSX and iPhone versions you can check out what’s coming up soon and what’s overdue, but only in list form. With the iPad, it’s displayed like like a weekly calendar, with an individual list for each day. Let’s take the example above and see why that’s important. If it was the 15th today, then I know that I have a few things that are overdue, but I also know that in the next coming days I have more to do as well. This is great for working forward, and getting ahead of the game – something which I would love to do myself. This feature has proved so popular that it was even mentioned in a recent update to the desktop version, as something they will be implementing in the future.

I find myself using the desktop and iPhone versions the most because of the way I work. But I recommended the iPad version to a friend of mine, and she loves it. I don’t even think she’d use the desktop version if she could, because the iPad app is just so perfect for her needs.

So it comes down to this: You’ve got three different versions of OmniFocus to get things done in your daily life. Now you just have to choose which one works for you.