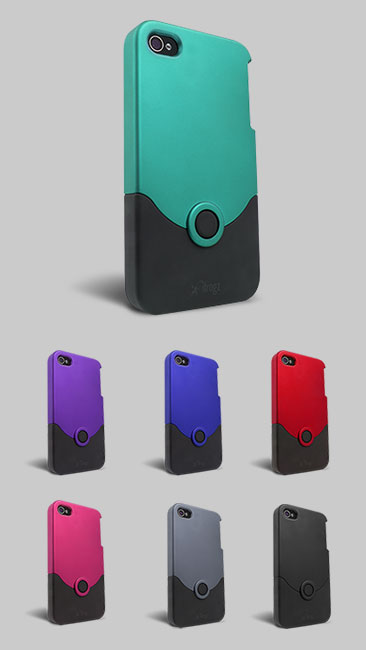 It seems like the iPhone 4 case frenzy is finally building to a boil, and now we’ve got one of the latest versions to hit the scene, the iFrogz LuxeOriginal case. Recently, the nice people at iFrogz sent over a complimentary model for us to review, so I spent a few days with it on my iPhone 4 to see how well it works.

Let’s talk about the case itself, which is the reason why it’s called Luxe to begin with. It’s got an almost velvety texture to it, which makes it very nice to hold in your hands. It’s weird how it feels almost fuzzy, yet it’s still plastic in design. Each case comes in two colors, with black being the base in all cases, and various colors – pictured above – for the rest. This is a two-piece case, which is nice because it allows you to take off the bottom to dock the phone. That’s the good part.

The bad part is also the bottom of the case. See, the problem with the incase Slider is that the bottom half has a tendency to slide off of the case accidentally if the phone is gripped wrong. IFrogz fixed this problem by adding a circular button in the middle that locks the case together. It also makes it very difficult to take apart when you want to. Besides that, the button feels weird in the hands, like it’s some kind of pimple on an otherwise great case.

Other than that, I think the case does pretty well. It’s fairly affordable – $29.99 – and it’s thick enough that it provides ample protection for the phone itself. I think that ultimately it comes down to a security issue for your iPhone. If you don’t often dock your phone, this case not only does a great job of keeping the iPhone safe, but also feels nice in the hands – minus the speed bump.