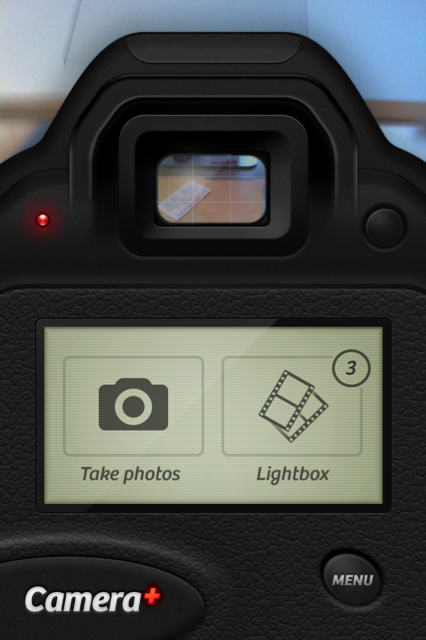 There are many different camera apps out there for the iPhone, but in my experience, most of them don’t do anything special. The other day, I ran across Camera+ [iTunes Link], and at first, I didn’t think much of it. Then I found a post at Smoking Apples, and decided to give it a shot. Right now it’s on sale for $1.99 – 60% off its regular price apparently – so it wasn’t a huge hit to the wallet.

Once it was downloaded, I pulled up the interface, which is pictured above. It gives the impression that you’re looking through the lens of a SLR camera, with the menu being on the rear viewscreen. Click on the “Take Photos” button and you get a viewscreen with a grid, making it easier to follow the rule of thirds. Click on the “Lightbox” button and you can either send your pics to the camera roll on your Photos app, or alter your photos with digital effects. This is where you can do your HDR, black and white, or whatever options you want to your photos. But it gets even better, because you can add a flash if you didn’t use one when you took the photo, and it can also change the appearance such that it looks like the image was shot in different conditions.

Ultimately though, the main reason I decided to download this app is because of a cheat I found on Smoking Apples. See, one of the real issues that I have with the iPhone’s camera is its activation. I don’t like having to hold the camera in one hand and then push the screen with the other. As it turns out, neither do the people behind Camera+. They actually wanted to make it so that the volume button activated the camera, but Apple rejected the app because of it. To fix the problem, there’s a hack:

Once that’s done, taking pics is as easy as touching a volume button. This allows you to hold the iPhone with both hands, stabilizing the phone even more. This makes taking solid pictures even better, and also gives the phone more of a traditional camera feel. This truly makes the app phenomenal.

As a result, I’m calling this one five out of five stars. I think it’s definitely worth the purchase price, particularly at the steep discount. Get it now, while you can.