Apple and Your Car 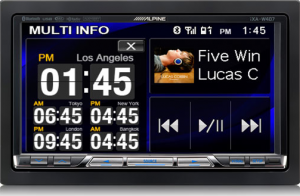 When the iPod was first introduced, it was just another MP3 player in a field of other models. But through iTunes and creative marketing, the iPod took off and the world was changed as we know it. Ever since it became popular, people have been trying to figure out a way to hook their iPod into their stereo, bringing their entire music library to the car. There have been lots of different options throughout the years, but the main problem has been that the car stereo manufacturers haven’t been able to keep up with the changes at Apple. They work on a once-a-year release cycle, whereas Apple puts out new iPods sometimes as much as two or three times a year.

This is Alpine’s latest in-dash iPod player, but it’s a little bit different than previous models. For one, there’s no CD or DVD player in the double-din interface. Instead, there’s a USB connection that allows the driver to hook up their iPod – or even a non-Apple MP3 player, if you’re that guy – and play it through the stereo. Previous models wouldn’t allow you to play video from the iPod to the deck, and this model fixes that problem, plus will allow you to connect your iPhone. Even better, there’s Bluetooth built in, so you can answer your iPhone through the stereo, instead of wearing a dorky Bluetooth headset.

I haven’t had any hands-on time with this deck yet, but I’ve been shopping for one for a while now, and this might be the one. When I make up my mind, I’ll give a hands-on review.