App Store Adds Explicit Category, Then Takes it Away 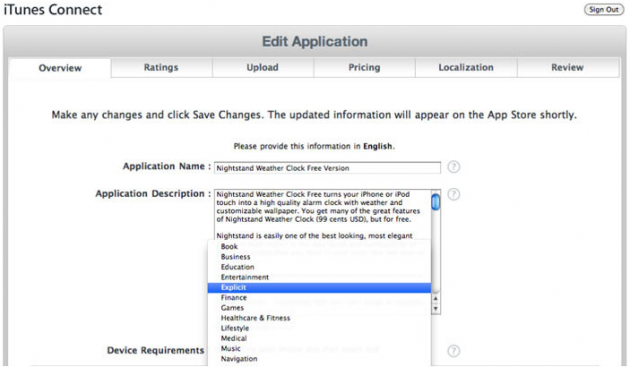 Earlier today, there were reports across the net that Apple had added an explicit category to the App Store submissions page, and in the Internet tradition of “screenshot or it didn’t happen,” they took a screenshot and, well, it happened.

Except now it hasn’t. MobileCrunch has both sides of this drama, and the latest comes via Gizmodo:

According to the developer, Apple said that, while they are thinking about it, “it’s not going to happen anytime soon.”

Well that was a roller coaster ride, huh?

Interestingly enough, I brought this up just the other day.

Sure, you could make the argument that the porn apps on the iPhone were a little ridiculous. Honestly, the Wobble app looks retarded to me, and I can appreciate the female form. But they could have made a â€œSexyâ€ or â€œPornâ€ section of the App Store where customers who specifically want their naked flesh can go to get it. Then put child protection options on iTunes accounts, that way a kid with an iPod Touch couldnâ€™t download Wobble unless he was 18. Not only would that have made a lot of people happy, it wouldnâ€™t have turned into the PR nightmare that itâ€™s become today.

That’s right, I’m a prophet. Or, a guy who can see the obvious coming from a mile away, depending on your perspective.