Aperture 3: Now with Faces and Places

by Lorraine Barte Nepomuceno 13 years ago8 months ago
2

The first time I learned about iPhoto’s Faces and Places feature, I wasn’t exactly excited. Did I really need my photo management app to recognize my friends and family’s faces?

Fast forward several months later, and wouldn’t you know? I love it. Especially Faces, which- after a bit of “training”- organizes my photos according to the people in them, generating a neat-o virtual corkboard, like so: 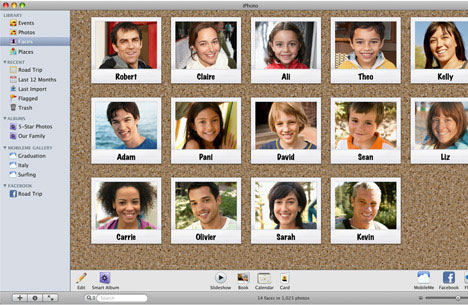 Places, on the other hand, adds a whole new dimension to my travel photos. I don’t have a GPS-enabled camera, so it’s less automated for me, but the ability to immediately find photos I took on my latest trips to Hong Kong or San Francisco is most welcome.

Today, Apple released Aperture 3, which- among other cool things (like Full Screen Browsing and Brushes!)- adds Faces and Places. Awesome news for my husband, who uses Aperture for his professional photography business. I’m thinking Faces in particular will come in handy for organizing his clients’ photos.