Airport Extreme – Can you get this thing working? Because... 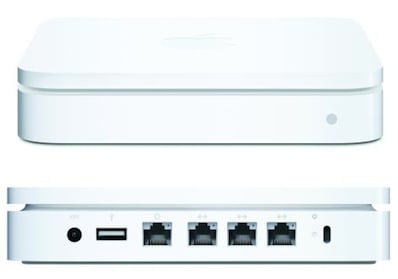 So this weekend, I decided to take the plunge into the world of 802.11n. My current wi-fi router has been acting up, so I decided it was time to get a new one – and I might as well go all Apple – so I got an Airport Extreme.

And it didn’t work.

That’s right, I got it home from Best Buy late Saturday evening, hooked it up, and it connected to the net, and noticed that their was a firmware update – so it downloaded it – and it never connected to the net again. I spent hours looking up support topics on my iPhone (because my desktop and laptop were not able to get on the Internet). I finally had to give up, and wait until the next day to call Apple.

So on Sunday morning I call Apple and spend about 2 hours on the phone with them (most of it holding). The people were very nice and helpful, but ultimately they couldn’t figure out a way to get the thing working, and I even heard one of the tech guys mumble “I wonder if we just got a bad batch of Airports out there?” Apparently I’m not the only one having problems.

SO – I took that one back to Best Buy and exchanged it for another Airport Extreme. I came home, installed it (skipping the firmware update this time), and everything worked swimmingly. For a while. Late in the day I decided to update the firmware (thinking that the other Airport was probably just a dud). Well, after I updated the firmware this time the Airport still worked, but since then it has been dropping out.

It’ll work for a few hours or a few minutess, then the network will suddenly be gone with no warning. The Airport will still have a solid green light indicating that its working fine – but the entire network is gone – not just the Internet, and I’ll have to unplug it and plug it back in before it will work. This has happened 5 times in the last 24 hours. It’s completely unacceptable.

Any ideas on what might be the problem? Does anyone know how to go back to the old firmware?

I’m getting close to just taking it back, saying “to hell” with the Airport Extreme, and getting a Linksys. thoughts?