by Kevin Whipps 13 years ago3 months ago
1 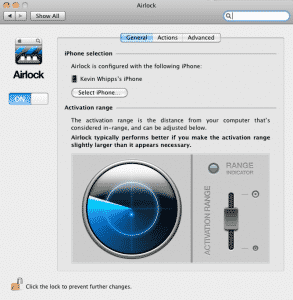 If you’ve got a laptop – or just a nosy roommate who always wants on your computer – you’re always dealing with security issues. Leaving your computer alone for just a few minutes means that you’re risking having someone else hop on for one reason or another. This was a constant issue at my old office, where I’d leave my personal MacBook Pro on my desk to go run out for something, and come back to find someone on it because they thought it was a company-owned model. Somedays I’m really glad I quit.

Anyways, I stumbled upon Airlock the other day, and after a quick e-mail to the makers, I was sent a free version of the software to evaluate for our readers. It took about 5 minutes to install and setup, then I was off and running.

Here’s how it works: Airlock installs as a System Preferences pane on your computer, and ties in via the bluetooth connection. It then finds the signal from your iPhone or iPod Touch with bluetooth enabled, and connects the two together. When you leave the room, desk, or general area with your iPhone in tow, Airlock shows a lock screen, and won’t allow anyone to use the computer until either the security code is entered or the iPhone comes back in the room. Once the iPhone does return, everything goes back to normal, like nothing ever happened.

It took me a little bit to set things up properly, mostly because of little tweaks with the system. There’s a sonar screen on the system pref pane that shows you where your iPhone is in relation to the computer. And that second line on the inside shows you how much range the iPhone has before Airlock kicks in. The manufacturers suggest setting the inner halo to just outside of the place you put your phone frequently, just to make sure it doesn’t go off randomly. I did that, and still had a few kinks, so I expanded my circle and that solved the problem.

There are a few kinks about the system. First, there’s an option to adjust how quickly the computer responds to commands, compared to how quickly it will kill the battery on your phone. The difference is fairly drastic. I left it at the original settings to begin with, and by lunchtime the iPhone was under 50 percent charged, a fairly drastic drop from the day before. I tweaked the settings to where I needed them and the battery life stopped dropping so massively.

Ultimately, this program is a great option for students, travelers or people who need extra security, because it’s one extra layer that might piss off a thief or would-be tinkerer. It can be turned off as well, so if you keep your computer at your desktop most of the time, then you can just turn it on when the laptop goes on the road or you go out of town.

But the best part yet is the price – $7.77, and there’s a free demo available too just in case you want to try it out. If you want an extra layer of security for your computer and a really cool way to do it, this is the hot ticket.