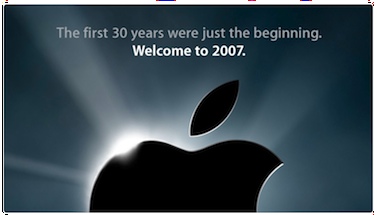 No one, however, got it quite right. The AppleTV was fully revealed at Macworld – then the entire rest of the Keynote focused on one thing – the iPhone. In fact, most of 2007 focused on that one product. It was announced as a mobile phone, an internet communication device, and the best iPod Apple had ever made all wrapped into one handy device.

The entire world became facinated with the iPhone. So much so that the major talk of CES 2007 was what was happening at Macworld 2007. The iPhone was on the news, on the web, and in the minds of just about every consumer you could find. For the first time people that had never spoken to me about Apple before were asking for more information on what this iPhone thing was…people of all ages and technology interest levels were eaten up with this super slick device.

February came and went, and we finally saw the official release of the AppleTV. While I really love this device, and most AppleTV owners use it daily – it hasn’t quite caught on with a majority of consumers, and was referred to by Steve Jobs as “a hobby” not a business. The future looks brighter for the device in 2008, but 2007 was certainly not the year of the AppleTV.

From March to April we speculated about the iPhone, and highly anticipated the release of Leopard, the next version of the Mac OS. On April 16th, however, we were hit with the official news that the iPhone was more important, and Leopard was delayed until October.

With no new products to speculate on other than the iPhone, things kind of stalled in the Apple news bin until May 17th when Engadget published a fake story that claimed the iPhone and Leopard were going to be further delayed. The story temporarily caused Apple’s stock to drop by $4 billion dollars, but it recovered after the entire fiasco was revealed to be a hoax.

Finally, in June the wait was over, and the iPhone launched to a roaring success. The device delivered on its promises, even though users were disappointed that there was no Flash or 3G support for the product. The iPhone was introduced at a price of $499 for a 4gb version and $599 for an 8Gb model.

The iPhone remained Apple’s primary focus, even when they released a newly designed iMac in August, and an entire new line of iPods in September. In fact, after the launch of the new iPod line, no one was even discussing the new iPods because everyone was focused on the fact that Apple also chose to drop the price of the iPhone to $399 only 2 months after its release. This enraged many early adopters, and eventually lead to a $100 Apple Store credit for those of us that purchased the iPhone on day one.

Apple and NBC also battled back and forth during the fall, each claiming the other was to blame for their inability to reach a deal to continue having NBC programming in iTunes. This discontent among content providers has not stopped, and other studios and companies have been striking deals with companies like Amazon in an attempt to kick iTunes off the perch of top selling digital stores. It has yet to happen, but things could change in 2008.

October saw the release of Leopard. The new OS was highly reviewed, even though it is arguably the buggest version of OSX to ever be released by Apple. New features like Spaces, Stacks, and Quick Look were all praised, but some users began having problems with their Internet connections and Macbook keyboards. Apple released an update to fix the keyboard issue, but the Internet problems still persist for some users.

The holiday shopping season appears to have done well for the company, and rumors have been wildly circulating about an Apple sub-notebook or iTablet being released at Macworld 2008, but that has yet to be seen.