In the post-paper world, digital note-taking happens on smartphones. If you’ve resolved to get more organized in 2018, check out five the best note-taking apps for iOS that you can use to get there.

While iOS 11 brought many major changes, the most obvious was to Apple’s own Notes. This was especially the case for any iPad Pro owners, who got an awesome upgrade for their Pencil’s functionality. But even lacking new drawing features, Notes has steadily moved from acceptable to functional. It’s responsive, with the input types like check lists and styled text. iCloud sync is functional, even if it is a little slow and unpredictable at times. It’s not a first-class note-taking app, but Notes is capable enough for the occasional note-taker. 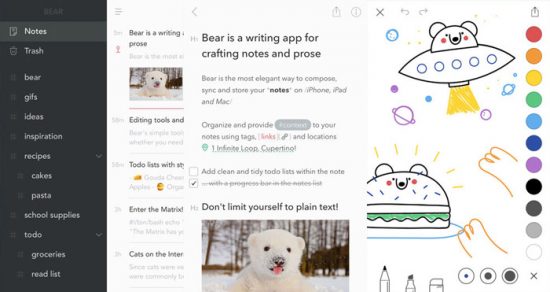 Ever since Bear’s release, the app has been our go-to note-taking app. It sports a gorgeous interface, with rapid note creation and filing by hashtag is fast and intuitive. Content styling make notes easier to navigate and interact with on a small screen. The app can even be used as a writing environment, with support for web styling. Notes can be exported as plain text or, style HTML or web-ready Markdown, allowing for easy transfer to your CMS of choice. The only big problem with the app is that sync is, by default, only available on the subscription tier. This means you’ll need to shell out a few dollars a month for Bear to work sync note content across multiple devices. 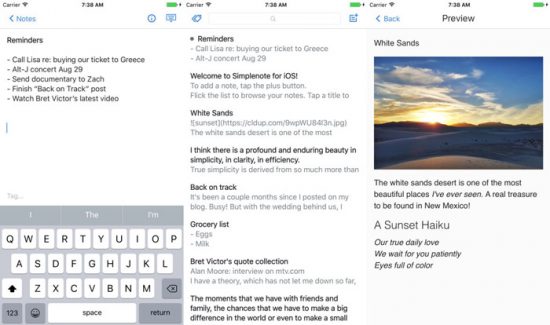 As might be apparent from the name, Simplenote is about creating basic, text-based notes. The app is built for speed and efficiency, not fancy styling or complex writing environment. Sync is universal, and comes free of charge. There’s a Simplenote app for just about every platform, and if you can’t find an app for your system, the web app is just as capable as the desktop version. Search is rapid and accurate, and sharing notes or publishing from the platform is also possible. The app is speed up by a lack of multimedia support, helping notes launch quickly. The time between opening the app and jotting down a note is almost zero. The simple note structure can also be easily transported to a new environment, either when leaving the service or archiving your notes. 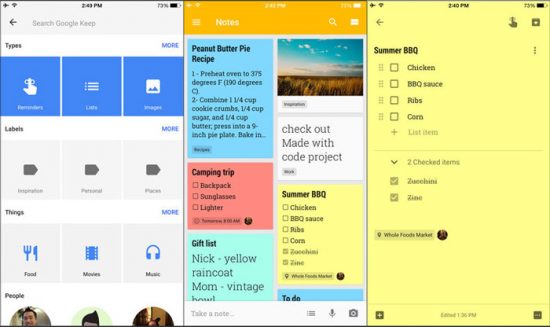 Google Keep was once a more powerful note-taking platform. But even since some of its features were removed, it’s still one of our favorite note-taking apps. It’s built for the scrap-book maker in you, with note-taking tools and broad multimedia clipping support. You can grab files directly from the web and save them in to Google Keep, cataloging your research, ideas or blog posts. Keep syncs up with Google’s other services, and the card-based design is easy to navigate. However, additional organizational options would be welcome, and no one knows how much longer the app will be around. It’s not like Google has shown much reluctance in killing off software projects in the past. 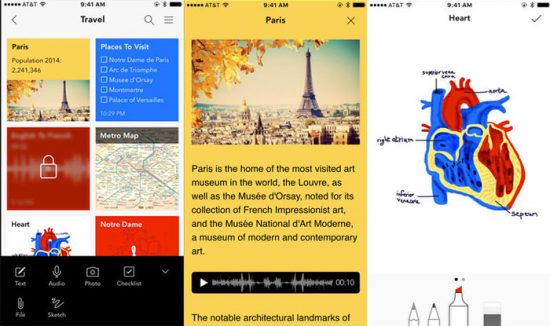 Like Google Keep, Zoho’s Notebook app uses a multimedia card-based approach to built appealing note-taking mosaics. It’s got a remarkably robust collection angle, with support for text, photo and audio notes. It even challenges Evernote with a web-clipping extension for Firefox, Chrome and Safari. The iOS app is elegantly functional, with a well-planned gesture based interface for sorting and organizing notes. Alongside multimedia content, you can also capture drawings. Uniquely, for audio notes, the first minute of every note is transcribed to text for free using Apple’s text-recognition algorithm. It’s our go-to note-taking app for trips and creative projects. 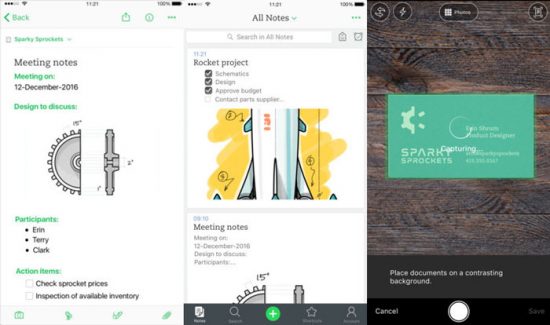 We can hardly talk about the best note-taking apps on iOS without discussing the grand-daddy of them all, Evernote.This app has lead the charge in digital note-taking apps for years, with support for heavy organization and a broad range of multimedia content. Evernote is like your attic, where you cram notes and content of all varieties, from business cards to drawings, and figure out if you’ll need them later. While the free version has encountered a two-device sync limitation, the paid version of the app is a voluminous trunk in to which you can chuck everything and anything, and search for it later. It’s the only app to support productivity features like a built-in document scanner with optical character recognition to search your scans. All this comes at a cost, however: the iOS app is slow and laggy, despite a recent makeover.

How to Export Evernote Notes to Apple Notes