Apple Responds to NBC: By DROPPING the new Fall Season... 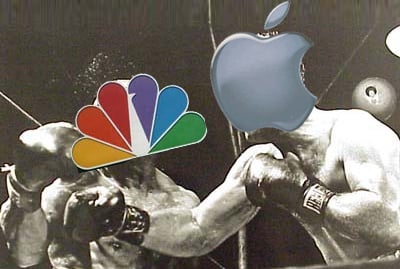 AppleÂ® today announced that it will not be selling NBC television shows for the upcoming television season on its online iTunesÂ® Store (www.itunes.com). The move follows NBCâ€™s decision to not renew its agreement with iTunes after Apple declined to pay more than double the wholesale price for each NBC TV episode, which would have resulted in the retail price to consumers increasing to $4.99 per episode from the current $1.99. ABC, CBS, FOX and The CW, along with more than 50 cable networks, are signed up to sell TV shows from their upcoming season on iTunes at $1.99 per episode.

â€œWe are disappointed to see NBC leave iTunes because we would not agree to their dramatic price increase,â€ said Eddy Cue, Appleâ€™s vice president of iTunes. â€œWe hope they will change their minds and offer their TV shows to the tens of millions of iTunes customers.â€

Appleâ€™s agreement with NBC ends in December. Since NBC would withdraw their shows in the middle of the television season, Apple has decided to not offer NBC TV shows for the upcoming television season beginning in September. NBC supplied iTunes with three of its 10 best selling TV shows last season, accounting for 30 percent of iTunes TV show sales.

The gloves are off. Apple isn’t budging. The ball is in NBC’s court now.