As the snow drifts reach five feet standing, the carolers remain horribly out of tune and the line at the post office wraps around the building as if it were a bright green gift box, there are still things about the holiday season meant to cheer people up: â€œWHAC-A-MOLE!â€ 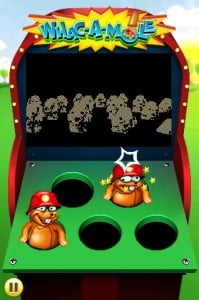 Simplicity meets violence; the player uses their finger to control the floating carnival mallet, and whack the lightning-quick laughing moles in reindeer antler garb. The game is fast, and though it is easy to start, it is also difficult to master, making it a bit addictive (particularly if one needs to get out some pent up rage at the expense of cartoon moles).

The graphics are crisp, as the 3D board looks as though it were at a carnival; a screen showing Santaâ€™s sled in a race with moles appears behind the action as a backdrop. The furry creatures need to be whacked quickly enough to plug up their mole-hole with snow. When stuck in line Christmas shopping be sure to utilize the â€œWHAC-A-MOLE Xmasâ€ game to relieve some stress!