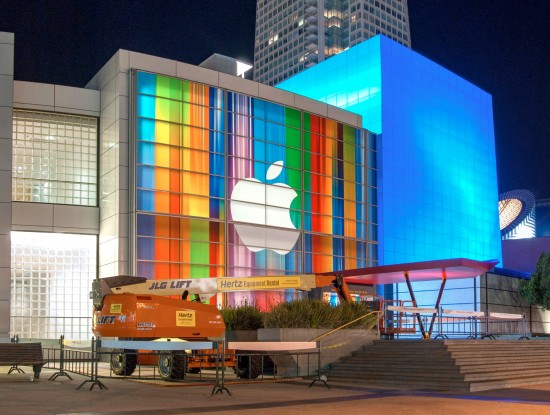 Over the weekend, photogs in San Francisco have been snapping pics of the outside of the Yerba Buena Center for the Arts, aka the location of many an Apple Event, including this week’s iPhone 5 announcement. But what is Apple saying with this huge banner?

Apple always decorates the backlit exterior of the Yerba Buena Center in preparation for its big media events. For this week’s event, expected to be the long-awaited announcement of the iPhone 5, Apple has put up a colorful, striped image that appears to feature icons from built-in iOS apps. The icons have been motion-blurred or stretched, vertically.

Is this image another hint about what’s to come, similar to the media invitation? If anything, it confirms that iOS 6 will be under the microscope at this event, where Apple will no doubt unveil some new features — and a release date — for the latest version of its mobile OS. But is there a deeper meaning? Many of the leaked images of the iPhone 5 show it to be a much taller device than its predecessors. In essence, it’s the iPhone, stretched upwards.

Apple knows very well just how rabidly we scrutinize their every move. Are they toying with us? Very possibly.