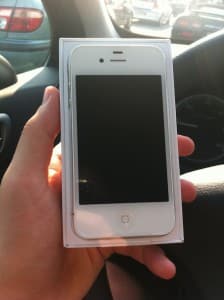 After being extensively delayed due to production issues it appears the white iPhone is finally coming to retail stores.

According to numerous reports, white iPhone are sporadically popping up in European and some state side stores. The official launch date appears to be tomorrow April 27th for almost all stores that have received stock of the white iPhone 4. However, some shops have begun selling the phones to eager buyers ahead of time.

It seems the first batches of white iPhone 4s went on sale in select areas of Belgium and came preloaded with iOS 4.3.1. Only 16 GB models are available according to buyers but its likely 32 GB models are on their way as well.