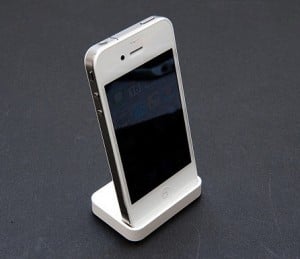 Apple has confirmed that the white iPhone 4 will be released Spring of next year according to in-store signage.

AppleInsider has an account of an Italian man with a white iPhone who claimed to be testing the device for Apple. He told a Seattle news producer that the phone would launch in February next year in Europe and that Apple was having problems with overexposed photos.

The white iPhone 4 has been the subject of a delay after delay as Apple scrambles to fix production issues that prevent the phone from hitting retail stores. Problems such as discoloring and light leakage have plagued the white iPhone 4. Due to the eventual delays and increased demand, unofficial third party manufacturers started selling DIY replacement kits or parts that allowed anyone to swap out the case on an iPhone 4 to a white cover. However, Apple has been cracking down on the third party market and has made the iPhone 4 much more difficult to open.