Well That Was a Fiasco 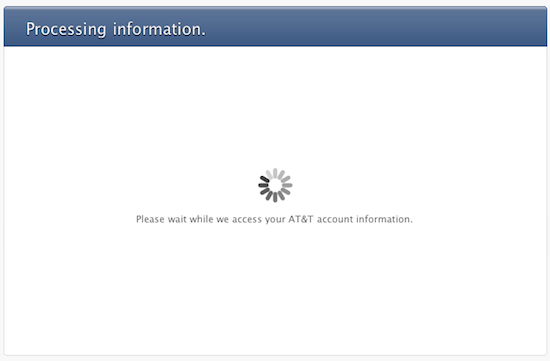 I woke up at the regular time, and intentionally didn’t look at the Apple Store. I knew things would be going haywire, but I figured I’d put my paranoia to the side and just focus on the task at hand. I had a doctor’s appointment for my son, so I had to get up to do that, and the plan was to go to my folk’s house to do the pre-order so I could help them out as well. At 9:45, I pulled up to my parents house, an hour and 15 minutes before the appointment. I sat down at my mom’s computer, logged on to store.apple.com and went for it.

As you may or may not have heard, the entire process was a giant cluster. You start off ordering the phone on Apple’s site, then you have to verify your plan with AT&T. That’s when the problems start. The screen above shows up and doesn’t stop. If you’re lucky enough to get to the next screen, it verifies the price of your phone, then tosses you to the above screen again. For hours, that was the furthest I had gone, with no luck. I read about AT&T stores imprinting credit cards just for a place in line. How the Apple retail stores were screwed too, because it was all through AT&T. I even read that AT&T was using servers that were only allowing 256 users at a time. Needless to say, that was a bad call.

I log in later – halftime of the Celtics/Lakers game – and I get through. Now it’s problems with the Apple Store that start showing up, because now it won’t recognize my Apple ID. I try again a little while later and get the same effect. My cart disappears, then comes back. Finally, after 30 minutes or so, I finally get in and place my order. On June 24th, I’ll be receiving a 32GB iPhone 4 and a blue Bumper.

Flush off my success, I decide to order my wife’s phone. Why not do it on the same tab? I ran the gauntlet once and didn’t want to risk losing it, frankly. This time, it goes a lot smoother, but with one change: My wife wants a 16GB model. Shipping date changes a few times on the slip, but eventually, it shows as shipping on June 24th on the final receipt.

So what’s this all mean? Well my first guess here is that the 16GB model is selling better than the 32GB model, which is not particularly shocking. It also tells me that if you haven’t pre-ordered yet, you’d better do it soon. It looks like some of the issues with AT&T might have been worked out, but the servers are still being hit pretty hard – even Apple is having problems. But at the end of a long day, I can sit here and happily say that I have a pair of iPhone 4s on their way to my house come the 24th, and I can’t wait.