You are here: Home / Feature / The iPhone of the Future 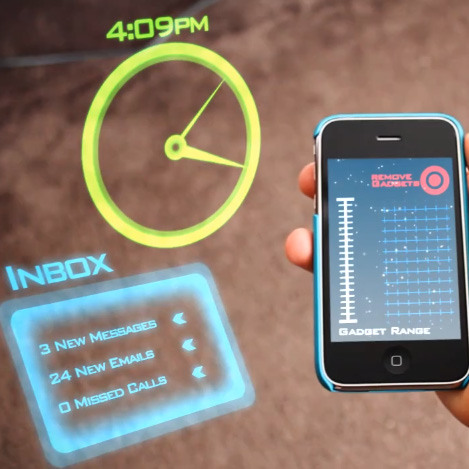 Six years ago, the iPhone came along and changed mobile computing forever. It boasted wildly revolutionary technology that we thought was impossible at the time. What impossible technologies will iPhones boast in another six years or more?

Can you remember what life was like before the iPhone came along? Phones were ugly, bulky things with clamshell designs or slide-out keyboards. There was no such thing as a multitouch touchscreen. No computers we could carry in our pockets. No devices we could interact with via nothing but touch. Or voice. No video phones that worked anywhere. These were technologies we could only dream of or see depicted in science fiction movies.

And then, in 2007, the iPhone came along, and the future arrived way ahead of schedule.

Nowadays, technologies come along at a breakneck pace. iPhones keep getting thinner and more impressive. Rumor has it Apple’s adding a powerful fingerprint sensor to its next iPhone. But anybody can speculate on what changes the next few iterations of iPhone are likely to make. (Bigger displays, anyone?)

I’m wondering what new technological frontiers future iPhones might unveil in another five or ten years. Let’s look at a few exciting possibilities.

Thin is in, and Steve Jobs was notorious for his belief that thinner is always better. The iPhone 5 upped the ante in this regard, with a device that’s precision construction has to be measured in nanometers. But where will this road of compression take us in the future? Might we one day have an iPhone that’s as thin as a credit card? Or maybe even paper thin?

Think of all the components in an iPhone — flash memory, processors, gyroscope, speakers, microphone, WiFi and cell antennas, and loads more — and imagine trying to squish all of that stuff together into something super ultra thin. Like, credit card thin. It seems impossible today. But there was a time when an ultra-thin laptop computer was considered impossible, too. Then came the MacBook Air.

Maybe five years from now, there will be an iPhone Air.

This may not be as far away as the rest of this list, because bendable displays already exist. Flexible OLED displays were presented by Samsung at this year’s CES, so you can bet your butt that they’re coming to the Galaxy line sooner or later. The real trick will be creating all those other components that will flex with the screen. All that stuff inside, not to mention the metal housing itself — these things don’t bend. At all. In fact, they’re made to be as rigid as possible to protect all those various fragile components. Getting those things to be flexible will be no small feat (unless Apple decides to separate the display from the rest of the hardware somehow).

But the real question here is, what’s the application of a bendable phone? What’s the point? Here’s a provocative concept that shows a tri-fold screen that unfolds to the size of an iPad Mini (below). That would be pretty darn useful, no?

But I’m not convinced of the usefulness of a bendable or curved iPhone. Instead, it’s far more likely that this technology will be applied to a different kind of device. Apple is believed to be working on a wearable computing device called iWatch. They’ve already filed patents related to this theoretical device, but it’s unknown if the entire band might be one big flexible screen, or if it will be more of a traditional device with a hard clock-style device at the center of a flexible rubber or leather band. If it’s the former, then Apple will most likely debut its work in the flexible computing domain with the iWatch first before implementing it on existing devices like iPhone.

One of the holy grails of touchscreen computing is a screen that morphs according to the needs of the user. Imagine that instead of using a virtual keyboard, real buttons would rise up out of the screen and give you tactile feedback just like the keyboard on your computer. It sounds like science fiction, but believe it or not, this technology exists now.

A company called Tactus Technology has developed a breakthrough means of creating touch-sensitive “bubble”-like buttons that rise up from a multitouch touchscreen when the user needs them. The round, bubble shape isn’t always ideal for keyboard keys, but I’m excited to see where the technology could go in the future.

Now that it’s been proven that it’s possible to do this, I want to see what comes next. I want to see someone like Apple perfect the technology so that shapes of any size can rise up from a touchscreen. Rectangles, sure, but not just buttons. How about larger structures like something resembling a gamer’s D-pad? Volume sliders? Spinning dials? The (now-impossible) possibilities are limitless.

Battery power and charging are the bane of every iPhone user’s existence. Heavy users might charge their phones three or four times a day. So everybody’s looking for new ways of extending battery life. Solar cell charging seems like a no-brainer, but no one’s yet found a way to integrate the technology in a satisfying way.

Except maybe Apple. Three years ago, Apple filed a patent for a novel idea: embed the solar cells beneath the device’s transparent touchscreen. The technology hasn’t seen the light of day yet — and may never — but it’s a great example of how Apple manages to solve so many design problems in smart, innovative ways.

Probably the most far-fetched technology on this list, integrating holograms is also one of the most tantalizing ideas. Will this sort of technology be integrated into a future iPhone? I’d be more surprised if it wasn’t. But it’s still a long way off.

In the meantime, check out these two awesome videos to get a taste of what an iPhone with integrated holography could do. I’m nuts about both of them!