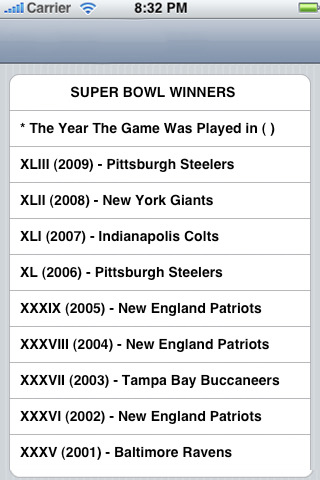 The free â€œSuper Bowl Winnersâ€ application turns the iPhone into a quick American football history lesson. Bet with friends as to who actually played in the big game from any given year and wow them, and their wallets, with your knowledge!

The â€œSuper Bowlâ€ App gives a bare bones crash course for a brief Super Bowl history, and the winners that played, in list form on the touchscreen of the iPhone. The free version is strictly American football, but for $1.99 the World Series, Stanley Cup, NBA Finals, MLS, MISL, NPSL, ASLII and NAFL championships are given as well.

The Super Bowl history is based around the NFL AFL merger and the first championship game involving both leagues, in 1967. The game wasnâ€™t actually declared the Super Bowl until 1969, and did not give out the Lombardi trophy until after Vince Lombardi died in 1970.

This handy â€œSuper Bowlâ€ App even includes all of the previous NFL Championship winners before the actual Super Bowls, when the AFL was a separate entity, though sadly the AFLâ€™s championships have been left out here.

For the curious fan out there the â€œSuper Bowlâ€ App confirms that Jerry Riceâ€™s San Francisco 49ers won the 1989 Super Bowl, and the 1970 champs were the Kansas City Chiefs. Enjoy!