See What’s Hot With the FLIR One iPhone Accessory

See what’s hot – literally. You know how thermal vision is always so cool in movies? You’ve probably had a dream or two where you were hunting the bad guys in a tropical rainforest, in the dark, but still having the upper hand because you have thermal vision. 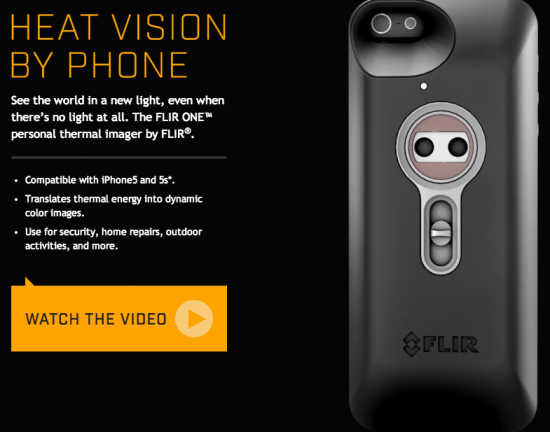 What if you can turn that into reality?

With the FLIR One iPhone accessory, you actually can have thermal vision – to a certain extent. You still have to use your iPhone – 5 or 5S – and not move about with both your hands free, but the idea is still pretty cool.

The accessory is just like a phone case, albeit one with better technology than ordinary cases. What the FLIR One does is to detect infrared energy – basically heat – and displays this on your phone. So in effect, you get see what’s hot around you.

Take a look at what the FLIR One can do.

As I said, it is pretty cool, and while the average person probably won’t be rushing to spend $349 on the device (it’s on pre-order still, by the way), its makers say that there are some commercial applications as well. Then again, I think that professionals would have their own tools for those applications.

So, unless you have $300+ lying around, which really don’t need, I suggest investing in a boost case or some other functional and not so expensive case.