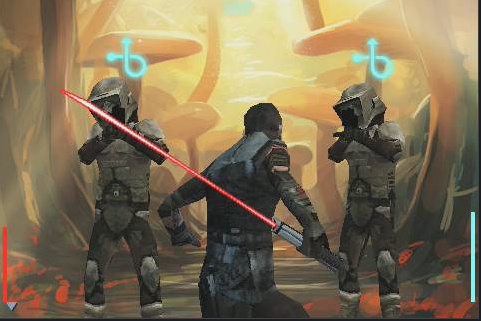 Star Wars: The Force Unleashed hits retail shelves today. Thanks to the instant access of the iPhone App Store, the game has already been available to iPhone users for several hours.

This mobile version of the Star Wars blockbuster game has a lot to live up to and a lot to prove on the iPhone. Not only it it trying something completely different with its control scheme and gameplay, but it’s attempting to bring a game that is built for platforms like the Xbox 360 and the Playstation 3 down to a much smaller scale – and not make it seem cheap.

The answer is yes.

The game follows the same basic storyline as its console counterparts. You play the role of Darth Vader’s apprentice, who sets out to do his Master’s bidding and help rid the Empire of Jedi scum. The first level of the game features the same plot elements as the demo level of the game on the Xbox 360. You must enter a Tie Fighter manufacturing facility and stop a Jedi Master. Vader wants his lightsaber – and you must obey.

The first thing you’ll notice about the game are the graphics. They don’t scream at you the way some two-dimensional games do. They are very similar to the kind of graphics you would find on a Playstation One, or a Sega Saturn. Nothing revolutionary, but certainly good enough for a mobile game.

What’s really interesting an innovative about the game though is the control scheme. Instead of controlling the character with some kind of on-screen joy pad or accelerometer options, the game uses gestures to move the action along – and it works really well. You don’t have to worry about moving your character around at all. He runs into new screens, you face your enemies, and he runs on to more screens.

In many ways it feels like a battle in an RPG game, except that you don’t take turns. You use your force powers (that you literally have at the tip of your finger) and you flick and twist storm troopers to their death, and deflect their blaster fire at the same time.

I thought, from looking at the video, that the novelty of this might wear off quickly, and that it might not provide a satisfying gaming experience. I’m happy to say I was wrong on both counts. I truly love the control scheme, and I think it does a fantastic job of bringing the power of “the force” to a touch screen device.

After playing through the first few chapters of the game I feel confident in saying that it’s worth the $9.99 price tag. It’s an impressive outing that really is a great deal of fun.