Reports From the Frontline 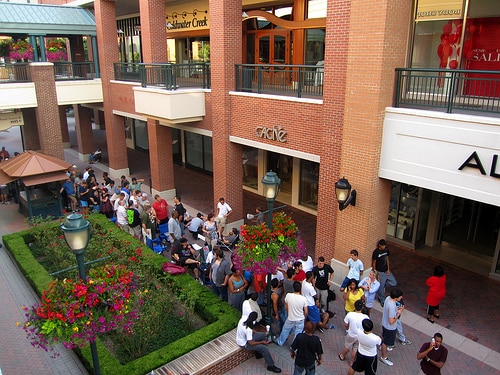 Man, yesterday was good for me. I sat at home, did some work, played around with my iPhone 4 … good times. For three of my friends though, not so much. As it turns out, three of my friends decided to pick up their iPhones in various parts of the country today, all with varying results. It really ran the gamut out there, with lots of reports of ridiculously long lines, activation issues, and problems with being reserved versus not reserved, but in the end, most people seem to have found a home for an iPhone 4. So what did my friends discover?

Modesto, CA: A friend of mine knew he’d be in Modesto yesterday, so instead of placing his order at home in Phoenix, he reserved a copy at the Modesto, California store. His theory was that “No one lives in Modesto, man. Everyone commutes to San Jose. There’s no way there will be a long line.” Turns out he was quite wrong.

He got there early and waited 5 1/2 hours to finally get to the front. Once there he bought his bumper and iPhone, then went on his way. When he left, he said there were easily 250 people in line.

Part of the problem – and this is a recurring theme here – is how Apple was handling reserved versus non-reserved customers. In Modesto, 50 reserved phones had to go out the door before one non-reserved phone could be sold. Because of that, many people left the non-reserved line and went home. All in all, my friend was pretty lucky that it was only 5 1/2 hours.

San Francisco, CA: My IT friend moved to SF from Phoenix a few months back, and now happily walks to work and back from his fancy apartment. The SF Apple store is up the street, so he decided to reserve his at the big Apple store. On his way into work, he stopped by, only to find that the line was three blocks long. Instead of taking the morning off, he decided instead to take off the afternoon and got in line around 2 or so. Three hours later, he walked out with an iPhone.

Phoenix, AZ: Good friend of mine couldn’t reserve his online on the 15th (like many other people, it seems) but neglected to reserve an iPhone via the Apple Store app. At 2:45 am he got in line and waited. He was also on the wrong end of the 50-1 ratio, except in his case it was 15-1. Eventually, those numbers dwindled down to 10-1, 5-1 and finally 2-1. It was 11 am before he finally was seen.

So he gets his first phone, and goes to buy his second. A fiasco occurs and at the end of this long process, he’s left with AT&T thinking that he’s already upgraded his phone, and no phone. It took some doing, but he finally got the other phone to work after leaving and returning later in the day.

Ultimately, this was a huge sales day for Apple. I have no idea how many phones were sold yesterday, but from everything I’ve heard, everybody seemed to be in line to get one. I’m willing to be we’ll see more lines today and some over the weekend as well. Can’t wait to see those sales figures come out.