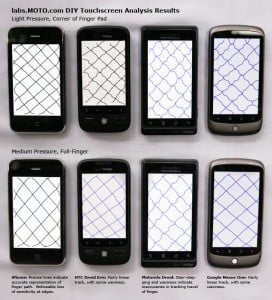 So, there’s this company called Moto Development Group, and they’re really big on touchscreen interfaces. Been doing them for 30 years now, so it figures that they might know something about the field. They decided recently to do a test of the big four smartphones – the Droid, the Droid Eris, Nexus One, and the iPhone – and see how accurate their touchscreen displays were. To do this, they performed a pretty simple test, and the results are pretty crazy.

The test goes like this: Open up a basic drawing program, and use your finger to draw a diamond pattern on the screen, first with light pressure, then with medium pressure. So how did they do?

With light pressure, the Droid Eris, Drois and Nexus One were all crazy jagged with very inaccurate results. The iPhone did well, but faded out in the corners. With medium pressure, the Eris steps up a bit as does the Nexus One, but the Droid is still rough like before. As for the iPhone, it’s status quo, same results as before.

It’s an interesting study, and it comes with a video to show how they did the tests as well. But for us, the Apple fans, it means that once again, our product is on top. Yay team Apple Gazette readers!