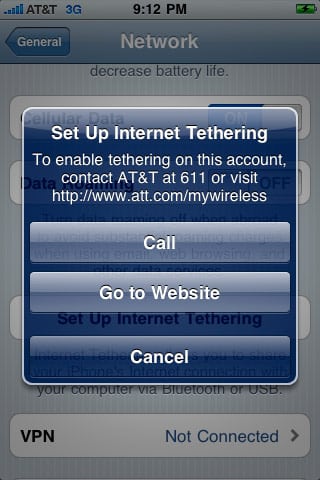 What, was it just yesterday that I was complaining about AT&T’s lack of tethering after what feels like a millennium? Well this latest report comes from a few different places, including Engadget and MacRumors, so I’m pretty confident that it’s happening, at least on Apple’s end. It looks like the latest developer’s version of OS 4.0 includes a tethering feature, which does exactly what you’d want it to do – tether your iPhone to another device. Jobs said a while back that there wouldn’t be tethering for the iPad, but it would be great if there was tethering for everything else. My MacBook Pro, for example.

My personal feeling here is that AT&T had to do this, otherwise they would fall behind even further than before. Like I said yesterday, Palm has a built-in Mi-Fi available in their phone on Verizon, which offers tethering for $40 a month – plus, it can be turned on or off at any time. The iPhone is pretty far advanced, but that doesn’t mean it’s going to be that way forever. The competition is ramping up their efforts to build their next phone into the next iPhone killer, and up until now, Apple has rebuffed their attacks. Problem here though isn’t with Apple, it’s with AT&T. It’s just another reason why I’d jump ship to Verizon tomorrow were I given the opportunity.