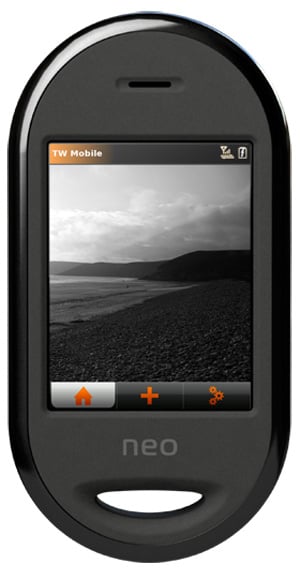 Last week I wrote a post here about how the LG Dare really wanted to be an iPhone. The point of the post was not that the Dare is a bad phone, just that it was disappointing to me to see LG create a phone that tried so hard to look like the iPhone (right down to the icons). Yes, I’m aware that the Prada came before the iPhone and that the Dare is an updated version of the Prada – that doesn’t change the fact that those icons are lawsuit worthy in their level of imitation, and that the Prada has been refitted to look more like the iPhone.

I think companies should be releasing phones that do different things, and don’t try to imitate the look and feel of the iPhone. Why? Because if you look at the history of the iPod you can see that people just stopped trying after it came out. There has been no innovation in that field since Apple jumped in – I don’t want the same thing to happen with the mobile market.

Which brings me to the Neo Freerunner. This phone looks like a very interesting alternative to the iPhone, and it does it without looking like a knock-off or cheap imitation.

The Freerunner is slightly smaller than the iPhone, and doesn’t have the internal storage or the fantastic software that the iPhone provides…but what it does have is wi-fi, assisted GPS, and accelerometer, 128 MB of Ram, a touch screen, and a blank slate for developers to go nuts on.

The Freerunner is Linux based. The phone comes with very basic features, but it is completely Open Source. The interface doesn’t look a thing like the iPhone besides some basic layout standards, and the external design of the phone looks about as different from an iPhone as is possible with a phone that’s primarily a screen.

If a strong community builds around this phone who knows what kind of great applications will be available for it? If I was an open-source coder, I’d be all over this thing.

Now, because of the advanced level of computer related knowledge that its going to require to get people really into this phone, it will mostly likely always have a small, core audience, and will probably never reach the sales levels of the Dare, much less the iPhone.

Still, this phone is a great example to companies about how you can make a touch screen phone that can stand on its own, and not look like an iPhone wanna be.