New KITT interior in upcoming ‘Knight Rider’ based on iPhone... 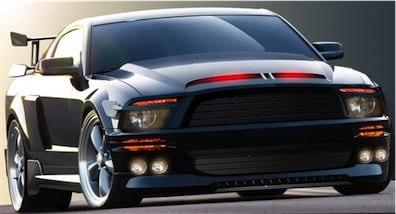 NBC and Apple may not have kissed and made up just yet, but Apple’s design influence is playing a big part in the upcoming NBC tv movie/pilot for the 2008 version of “Knight Rider”.

In a recent interview at Knight Rider Online, series producer David Bartis discussed the origins of the interior design for the new KITT:

You’ll see that the interior is modified, it is not the stock interior. It has panels in it that will reveal accessories and technologies. when you look at the most advanced technology consumers have access to now – it doesn’t involve alots of dials and gages and moving parts. You look at the iPhone and you go – thats the coolest phone out there. It’s just a flat screen that you can touch and access anything. So the iPhone interface was actually a big inspiration for the way the interior of this car would look because its very simple, it’s very streamlined, it’s very clean. It doesn’t make sense to build something that looks like the inside of the millenium falcon cause that’s not high tech anymore.

There is no buttons, there is no moving parts anymore. It’s all about how clean and simple.

Below you can see an image leaked online that is supposed to represent the interior of the new Knight Industries Three Thousand.

You can see the center of the dashboard appears to be a touch screen interface, although we probably won’t see the UI until the tv movie premieres on Feb. 17th.

For full coverage of “Knight Rider” and all things TV, you can check out our coverage on sister blog, TV Jab.