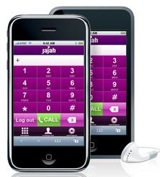 JAJAH is reportedly developing a native iPhone VOIP application which is set to be released in the summer. Steve Jobs has already gone on record as saying Apple wouldn’t restrict such a thing over wi-fi connectivity, and Jajah may be one of , if not the, first to offer a VOIP solution for the handheld.

Jajah already offers a web-based calling solution for the iPhone, which users would be able to access when not connected to the wi-fi network.

Look for the application shortly after the iPhone 2.0 launch this summer.